I am pleased to share with you this interview with Masami Sakakibara, one of the greatest Tenkara master. I decided to try Tenkara after watching one of his videos and Masami-san is for me, and many others worldwide I think, a great source of inspiration as while I would never pretend having any skills comparable to these of Masami-san I recognize that my ultimate goal is to reach this level.
I wish you will be interested by this interview as much as I am.

Thanks to Hiroyuki Von Langen Schlucht for his invaluable help as interpreter. 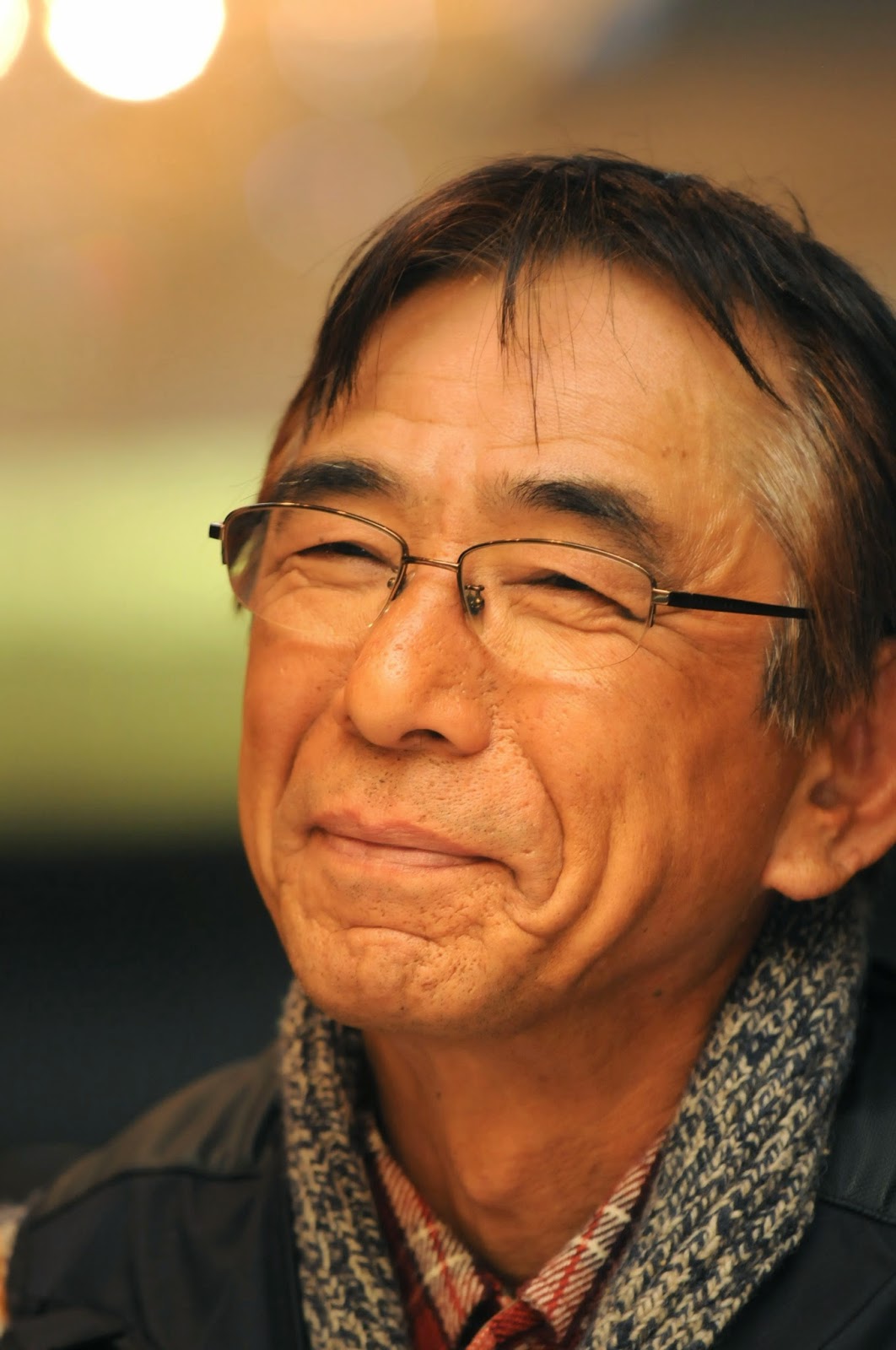 Christophe: Hello Masami-san. You are one of the most famous Tenkara angler in the world so I would like to thank you for giving some of your time to answer this interview. Having watched many of fishing videos and reading your articles on your blog that are great sources of informations and knowledge I was wondering how did you learn all these things? Did you learn Tenkara from someone?

Masami: Nobody taught me Tenkara. There was no Tenkara angler around me. Although I did grow up near the river where there were some much Ayu and Amago, everybody enjoyed bait fishing or the casting net fishing. My father just taught me that there were a fishing technique called Tenkara. However my father like bait fishing. I studied various techniques totally by myself at the beginning, using furled line for saltwater among others. I tried so much anyway, that the fishes gave me the answer on the river: "That line is no good, sounds big when you cast on the river. We beware of it."

Christophe: Your tenkara style is famous and admired for its very high technical level and especially for the use of very long lines, can you please explain to us what was your skills evolution through out the years and what is in your opinion the best way for a Tenkara angler to reach a high level of casting skills?

Masami: Just only the passion for Tenkara is what made my technique evolve. I practiced the casting everyday to reach the casting technique I have now. I practiced day after day, before and after my job with a debarbed kebari for safety.
It is the same as for any kind of athlete. Practice, watch the casting of others, advise each other with friends.

Christophe: You are also known with the nickname "Tenkara-no-Oni", what is the story of this nickname? I did read in one of your blog's article that you considered concentration as one of the main quality of a good Tenkara angler and I also noticed your sense of stream and fish approach that is very particular and seems to be an important aspect of your Tenkara style? What is according to you the best way to approach a stream and be successful?

Masami: My fellows gave me the nickname "Tenkara-no-Oni" as a joke because my face was scary when I was fishing. There is a word "鬼の形相になる" in Japan that means "becoming the evil face".
Then I told them seriously that I was playing.
About the approach I think that I can say that it is "everything" in fishing. I have a lot of experience and I still watch to understand the river conditions, if fishes are hungry or scared and then I decide of the best possible approach.

Christophe: You have recently published several articles about technical issues and one of them was about "Sasoi", I have tried to apply this technique to my fishing and I must say that it is very effective, even on spooky fishes. What is your concept of fish enticing? How do you decide to fish with dead drifts or "Sasoi'?

Masami: Sasoi is a technique to interest fishes when  they are not hungry, a technique that excites their curiosity with moving a kebari in front of their eyes. I can not say that it is effective every time as fishes seem to have lost their curiosity sometimes. I do not have a favorite technique in this field.
I use Sasoi first in big pools or deep spots and I do not use that first on normal streams. Fishes do not rise to the surface in big pools or deep spots so I use Sasoi first and I do it slowly. I like natural drift and that is a natural drift technique. I decide if I fish dead drift or Sasoi after watching the river conditions, if fishes are not scared and when they can be enticed. 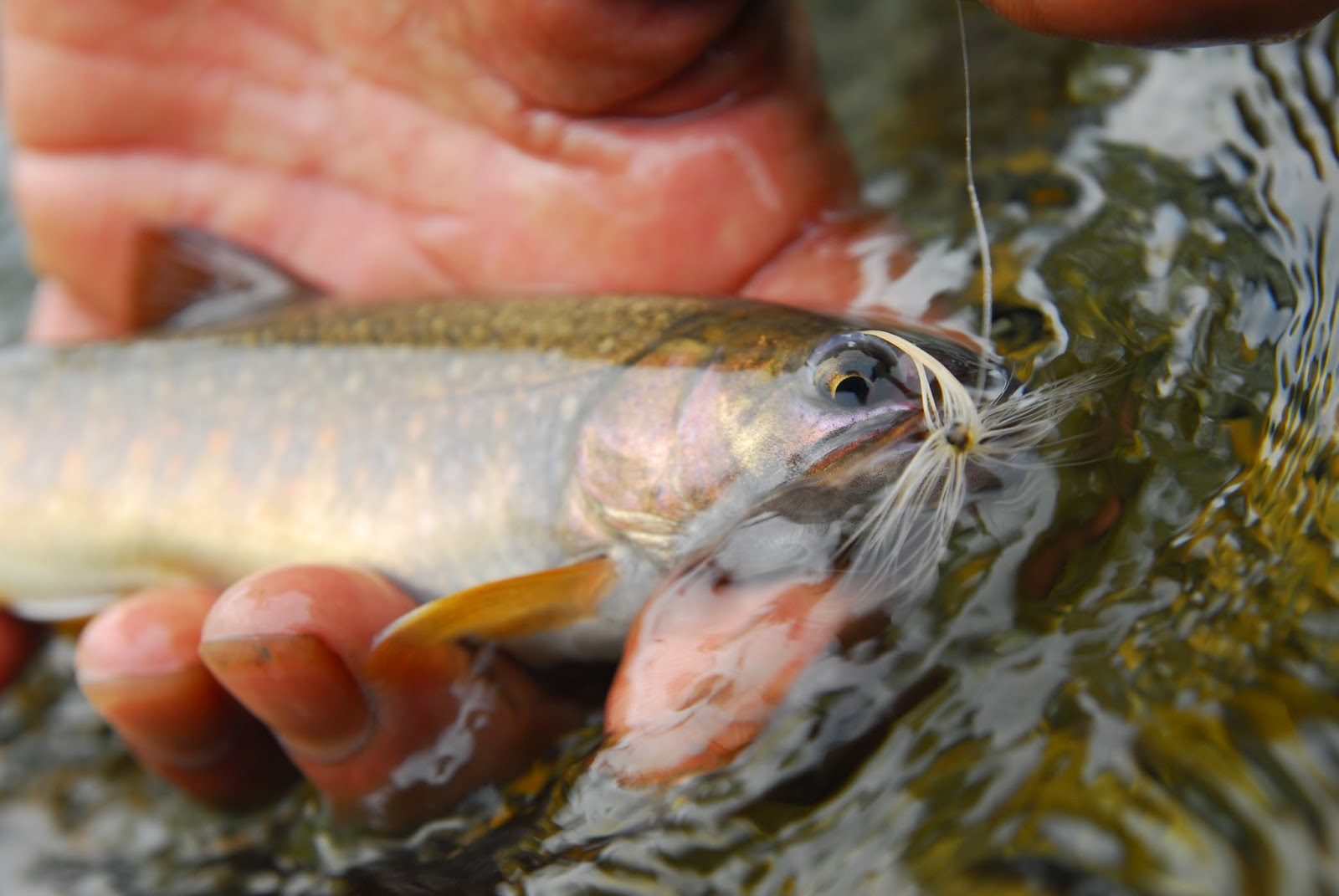 Christophe: You run your own school of Tenkara and I was wondering how is a typical day at the Oni Tenkara school? It seems that today young anglers are more individualists than the elders and that anglers clubs have difficulties to find new members; do you think that this is because of the technological progress allows to share informations and knowledge without meeting or because of a deep change in the state of mind of anglers?

Masami: Oni-juku (Oni school) deals with casting, reading the conditions of the river, where kebari should be casted and then how to fish! It is a school with actual fishing. A particularity of Oni-juku is that every pupil will inevitably catch one fish and it is hard to find Tenkara schools that can make every pupil catch some in Japan. We also talk about Tenkara and memories of the river, we tie kebari and enjoy BBQ. There are no concerns of age or jobs, the school stands on the only hobby.
Compared with my generation young people seem to have lost the passion for fishing. in the past anglers were more skillful and searched to improve themselves. Till my generation it was out of question to use split shots or heavy hooks for Tenkara fishing. Tenkara was done with a line and a fly and making the kebari sink was only done by using the stream flow, that was the only technique. Young anglers use split shots or heavy hooks for fly fishing with ease. They say calmly that there was Tenkara anglers using split shots in the old days, there were some because professional anglers wanted to catch fishes anyway. However the people who stick to this beautiful technique called Tenkara which is a Japanese tradition will try to fish with the technique only, they will not rely on the gear, split shots or heavy hooks, because Tenkara is wonderful.
If you just want more fish, bait and split shots will give more catch. 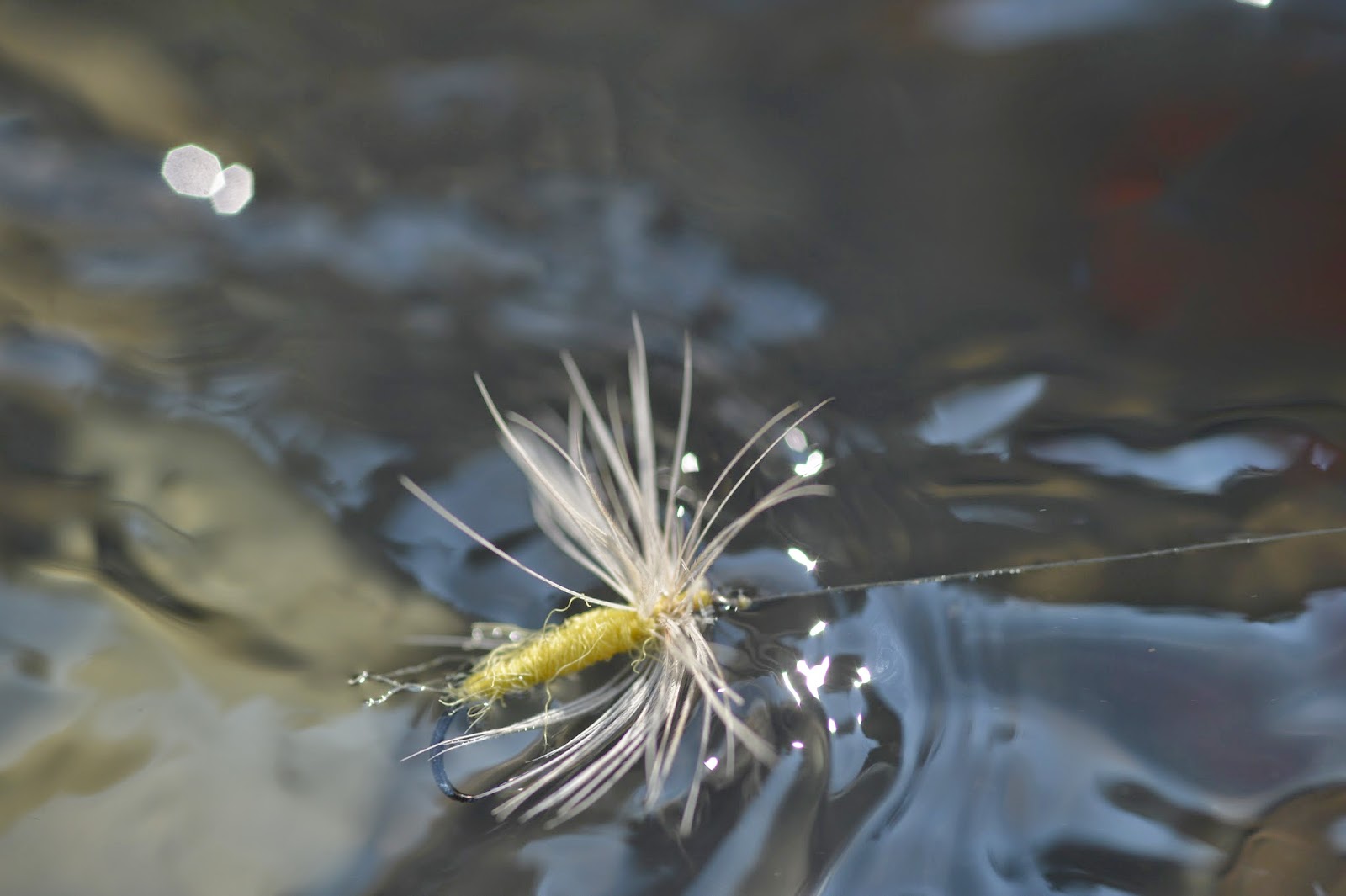 Christophe: How do you see the evolution of Tenkara now that it is spreading worldwide? Do you think that it is on a good way? Do you think that western anglers are respectful enough of the Japanese fishing tradition and culture? What is your opinion about the controversies in the west about what is true or false Tenkara? It seems to me that Japanese anglers are more interested in finding their own style than having an opinion about what others anglers do...

Masami: It is nice that it is spreading worldwide and that more people know this wonderful fishing technique. Do not rely on gear, release as many fishes as possible because their population are diminishing. I think that Tenkara is an aspect of the Japanese culture like Judo or Kendo. Every country has its own situation about rivers and fishes, rods have to be thicker and stronger for countries where there are big fishes (over 40 cm). Some people may need to fish "harder". It is the same in Japan where there are some people who enjoy bead headed sinking kebari. I think that it can be named "nymphing kebari".
The simple fly fishing made by Patagonia in the U.S.A is not Tenkara, that is a method of simple western fly. I love Tenkara targeting Japanese stream fish and I want to study and find my Tenkara.
Fish finder, heavy hooks, easy casting lines...The gear is evolving more and more but we do not need it. Level line is the ultimate line. Only technique matters.

Christophe: You have just released a new range of Tenkara rods that are considered by Tenkara connoisseurs as truly one of a kind rods, can you tell us more about the conception of these rods? There are new brands of rods popping up from everywhere nowadays so what in your opinion makes the identity of the Oni rods? What is your personal favorite of the three Oni rods?

Masami: I made the Oni-zao castable for everyone, a rod one can cast all day long. And these are the kind of rods that make you enjoy the fight with a fish you have hooked. For the people who want a lot of fishes like in tournament fishing it is better to use harder rods that can land the fish easier.
I like the idea that Oni-zao are used by people who can sincerely enjoy landing any fish they catch.
Type I (4m) was praised by an American blogger as N°1 rod in the world. That is a delicate yet precise rod.
Type II (4m) is made a bit thicker from the bottom to the tip but there is no difference about lightness. I made this rod for the people who are not to handle a Tenkara rod.
Type III (3.4m) is a shorter Type II. I made this rod for the people who want to fish small streams so it is extremely light and can cast precisely.
Anglers who bought Type I buy Type III for small streams. Be loved by Japanese orthodox anglers, that is Oni-zao.

Christophe: You are famous for the use of very long lines and I think that many anglers would like to be able to handle such long lines but it is not easy so would you like to give us advices to improve our casting skills?

Masami: I began using long lines for river because I often went to a river that wide and torrential and I wanted to catch the fishes that were on the other side. I needed 12 meters! People who fish small streams do not need long lines, it is a technique that emerged from necessity. If you want to cast long lines, you only have to practice anyway. Use a thick level line (size 4) and you master 5 meters, change for 5.50 meters and so on. Doing like this you will be able to cast long lines. 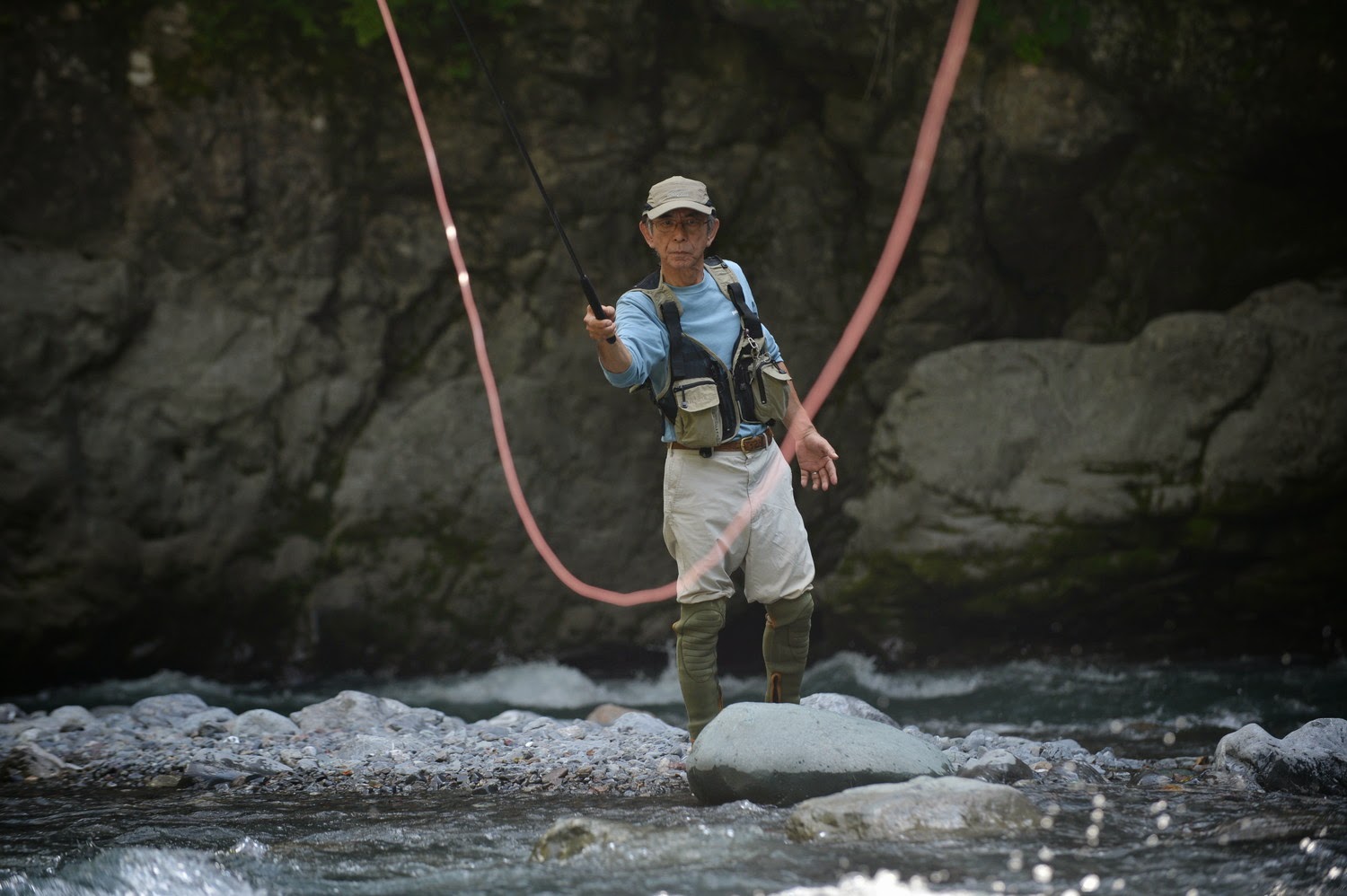 Christophe: What are your plans for the future? I would like to ask you if you have ever planned to write a book about your Tenkara?

Masami: A book about my Tenkara technique will be published in the middle of June so I am busy with the last details now. The book is written in Japanese but I intend to make translate it in English.
Oni-juku will move to Italy (July) and to the U.S.A (November). Why don't you come in Italy, Christophe? It's near you. 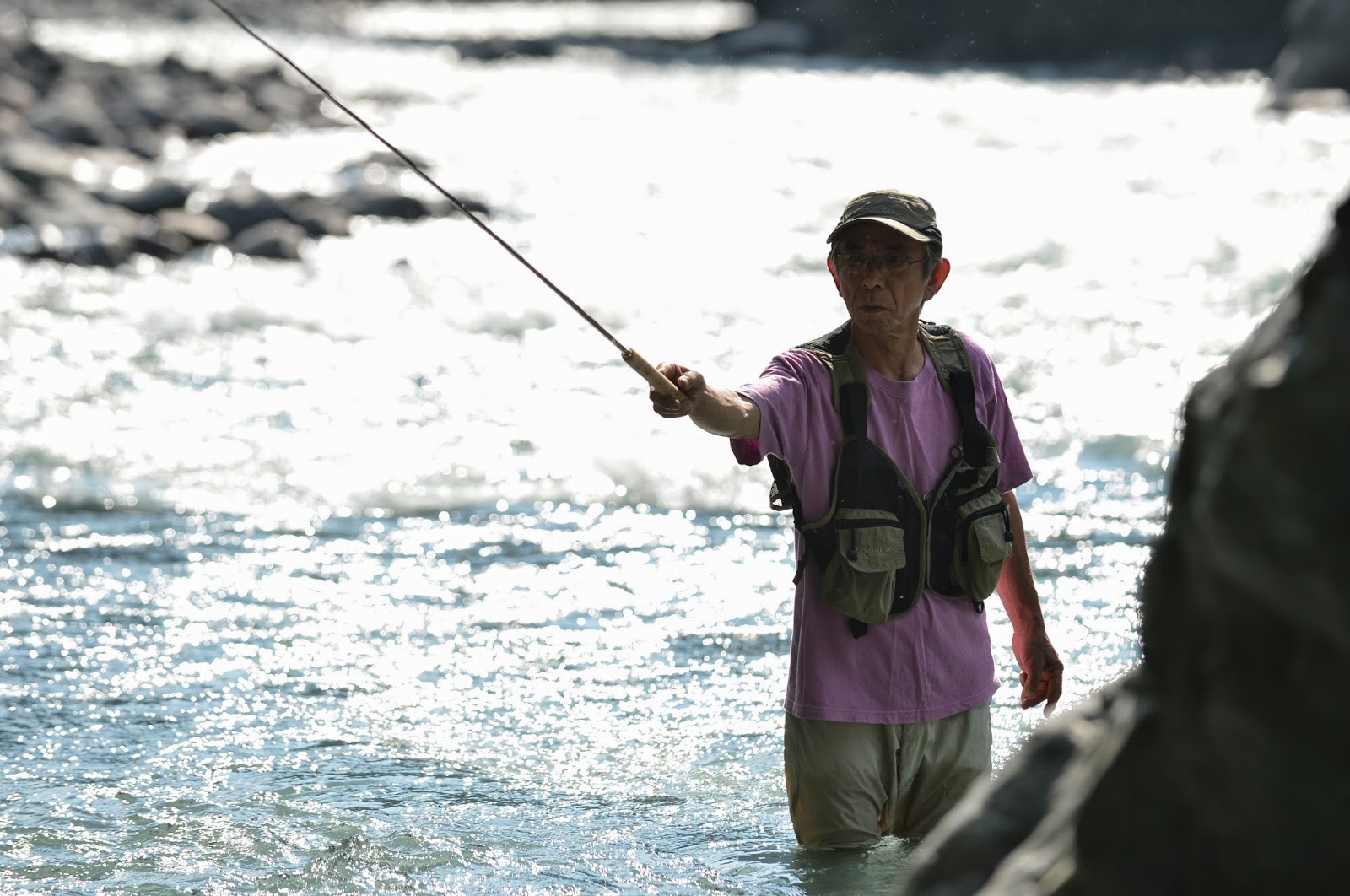 Christophe: Thanks for this invitation Masami-san. I will certainly not be lucky enough to have days off in July. Thanks a lot Masami-san for giving some of your time to answer these questions that I hope were interesting for you. Please, conclude as it pleases you.

Masami: Thanks to everyone for your curiosity about Tenkara. There are many fishing techniques in Japan and Tenkara is a minority and every angler has his own technique. So it is more logical to think about your own style than judging what is right or wrong.
It is a game with nature so please be careful and enjoy Tenkara. I wish to each of you to enjoy Tenkara in your streams. I thank you Christophe for giving this opportunity. Thanks!