Since my last tenkara outing the area where I live has faced highly unstable weather and many thunderstorms and as I have seen last weekend the streams still wear their stained winter dress but yesterday by the end of the afternoon  I wanted to enjoy the little bit of free time I had so I decided to visit the stream close to my home with the hope that I could fish in.
The sky was slightly overcast, the wind was low but I did think that the conditions were better than the previous week and I made my Oni type 1 rod ready. 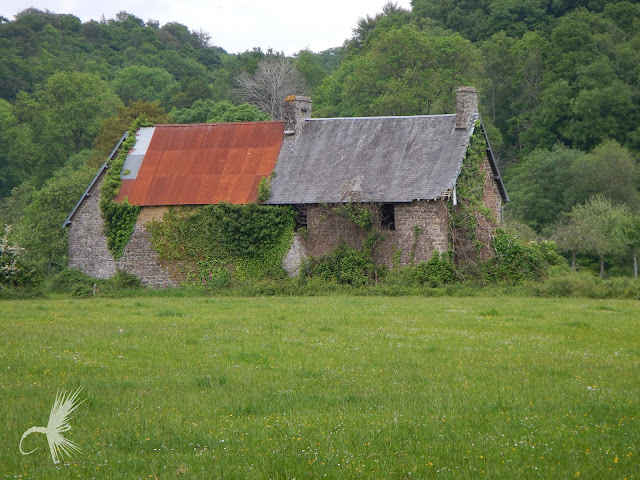 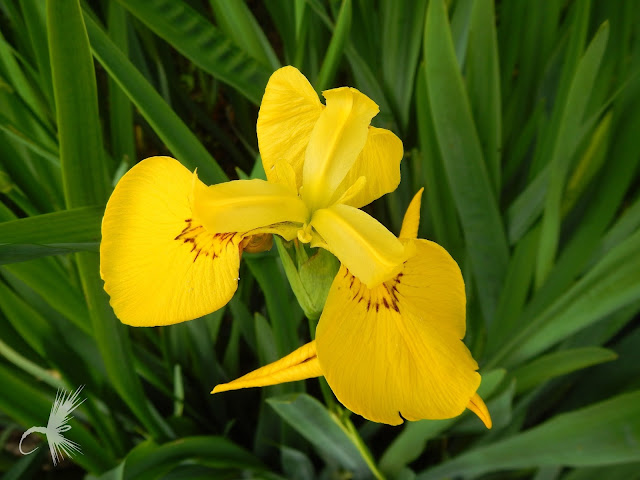 It was my first fishing session on this stream this year and my first observation was the number of trees bent by the winter storms or outright fallen into the stream. 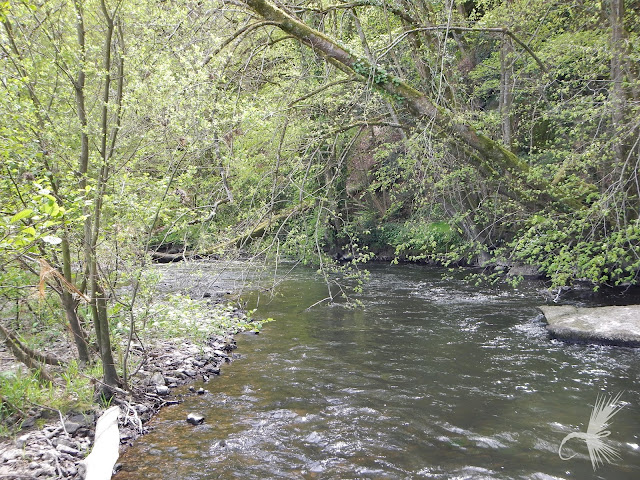 If the water was stained in the mainstream it was clear on the edges. There were lots of insects emerging among which tiny black sedges and mayflies. 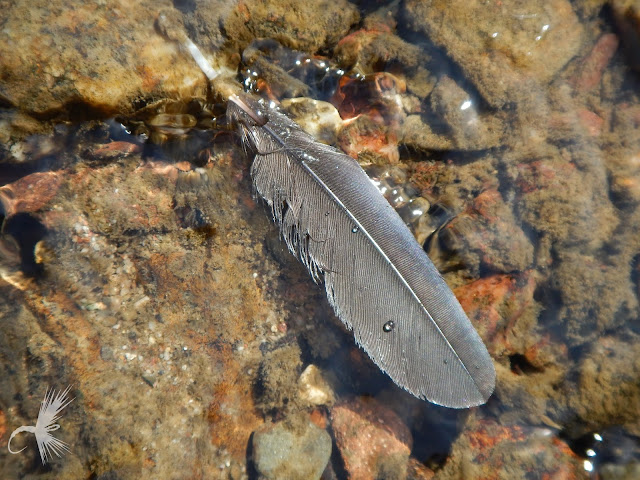 I had four meters of the new Nissin Oni-ryu level line size 2.5 on my spool as well as a meter of fluorocarbon tippet to which was tied a Yamato kebari. 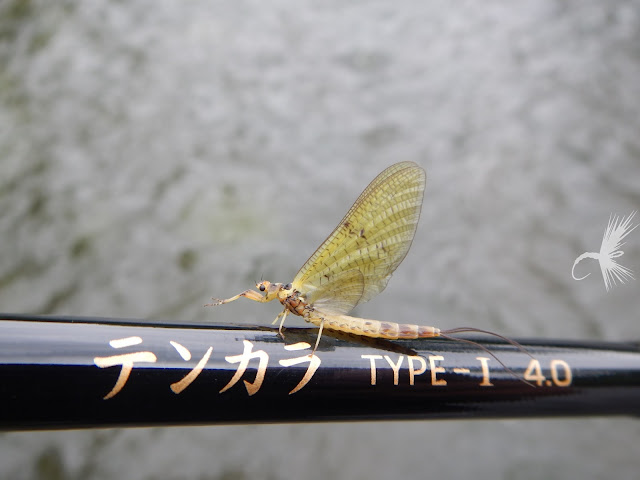 I caught the first trout of the day after casting a few meters upstream its rising spot. I quickly released it, walked a few meters to catch a second one after seeing it rise to a large mayfly. 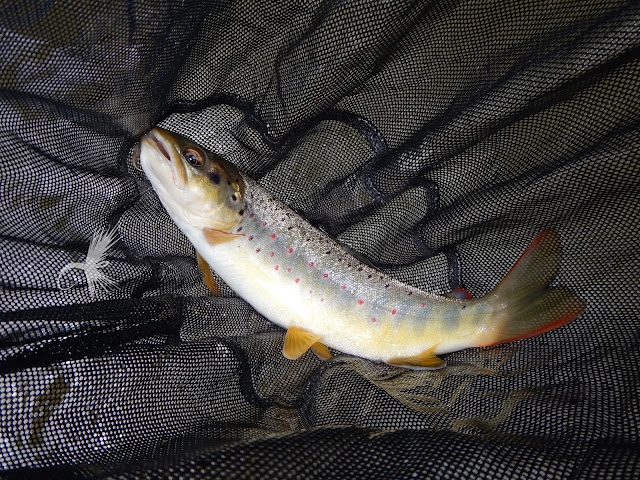 Trout were active, and did rise easily to the surface thanks to the regular hatching of mayflies, my stealth approach combined with accurate casts and controlled drifts were rewarded by several catches. None of the trout seem to make any difference between the natural mayflies and my Yamato kebari. 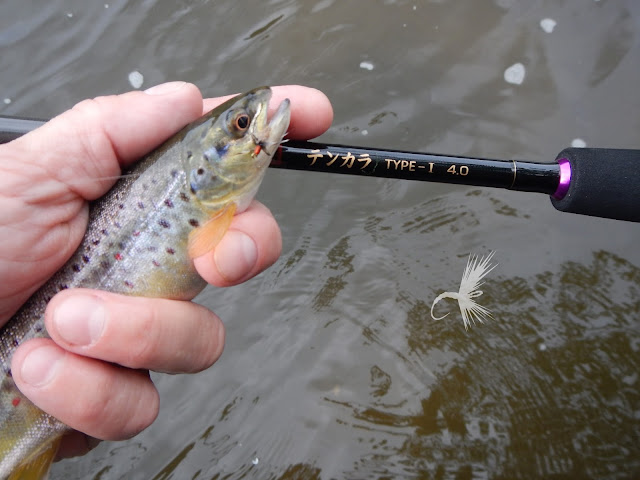 Time passing by the wind got stronger and trout less active so I decided to walk upstream to a more sheltered spot. I did hit a small fishing spot that I like because I always find several trout in the quiet raws of the stream. If you want to train fishing without using weighted patterns that is the typical spot you have to look for. 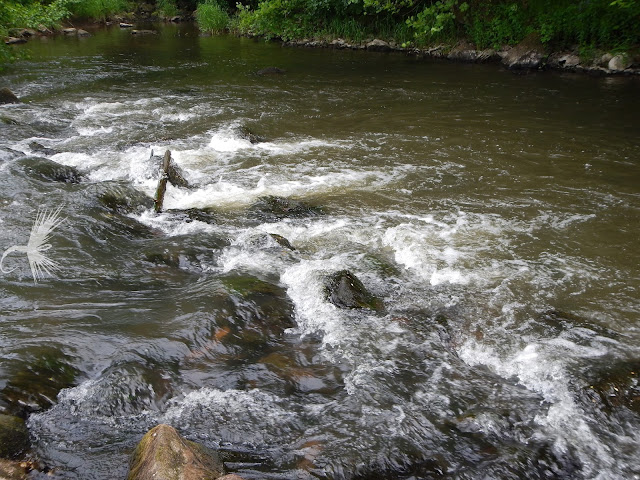 Accurate casts and controlled drifts are the keys to success in tenkara fishing; there is no need to knot or stick accessories to your line or tippet. A minimum of concentration on what you are doing is much more useful than the last fashionable gadget advised by fishing forums "experts". 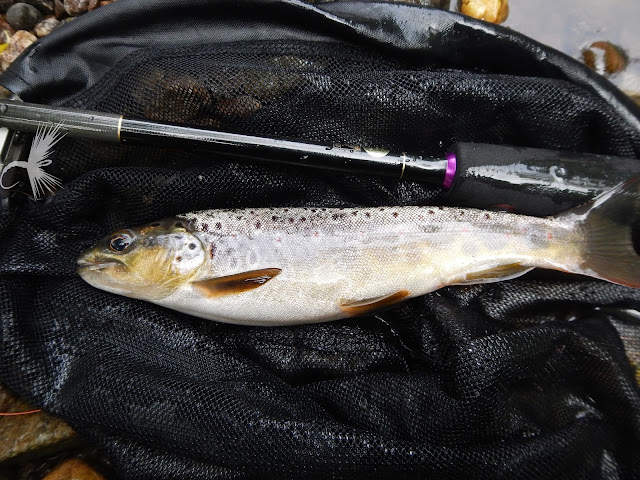 Despite stained water, cold and high water trout were still moving for food. 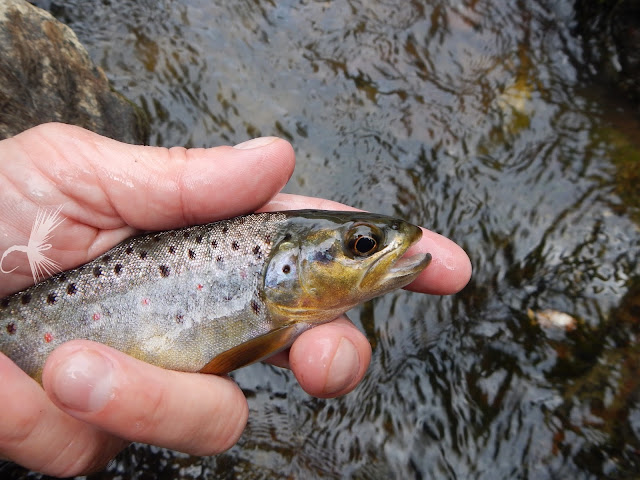 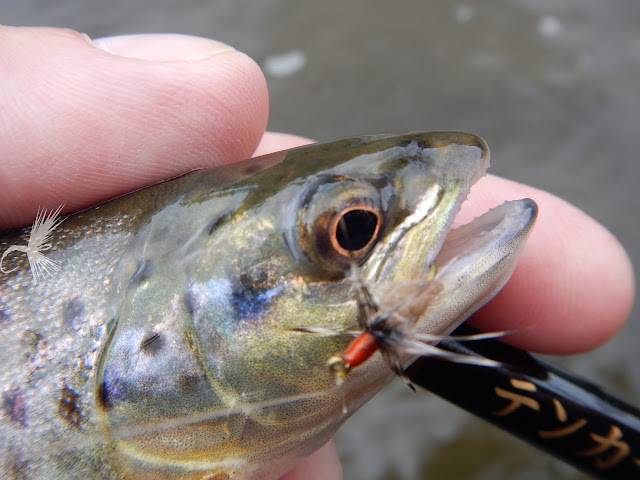 The wind was rising and I did feel that the temperature was dropping as it has been almost every evening for the last weeks. I did catch a last trout and as it was gone back into its habitat I did collapse my rod, disconnected the line and did take the way back home. 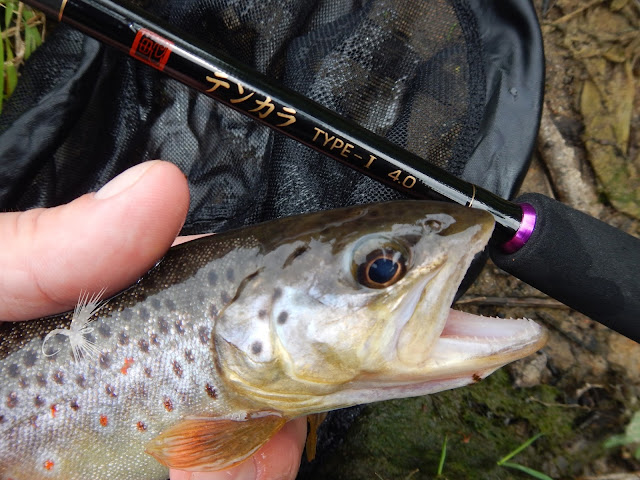 It was a short and enjoyable tenkara outing, I did not have the opportunity of a typical June evening rise but I still enjoyed these moments on the stream. Maybe next time...

A sunday between tenkara and photo

The weather was very nice last week, the sun was sunny every day and helped temperatures that were till then under the seasonal average rise so I have spent last sunday in the outdoors to enjoy tenkara and photography.
This time I decided to go on a small stream, and not a creek, to check the water level as during the last months it has been very high on the whole of local streams. I did not know what to expect at all and I was positively surprised to find a clear stream which has many spots with dropping water level. But as I noticed when I started wading it is still very cold. 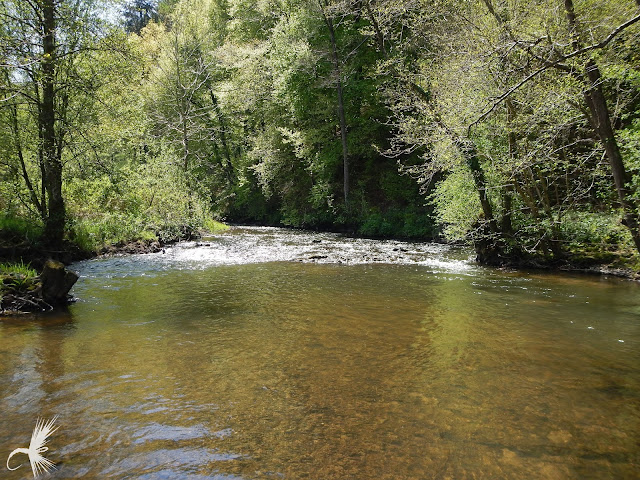 I did quietly rig my Oni type III rod and knotted to my tippet a kebari that I have been carrying everywhere for several seasons now. I could name it a mayfly or perhaps "mayfly kebari" but I have used it for the whole 2014 trout season with only one variation, presence or absence of the peacock herls thorax, and I have no regrets about this experience. Anyway last sunday, at least during I was on the stream, there was no ephemera danica hatching. 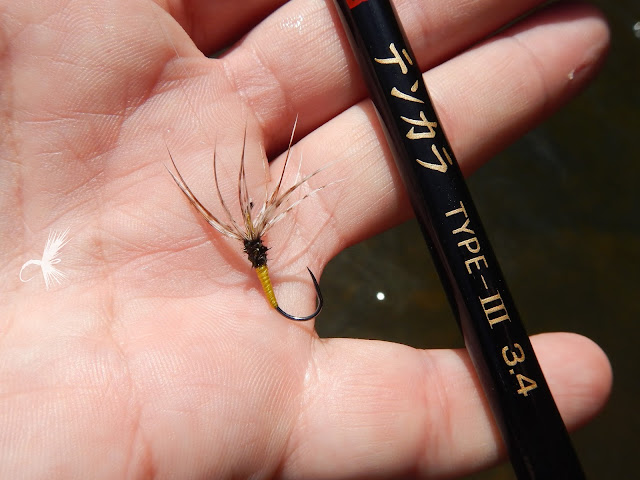 I only saw a handful of sulphur emerging and flying away without a single trout to rise and catch one.

I applied to accurate casts, using the current as best as I could to make my kebari go to the stream bottom as one can do if fishing tenkara as it is meant to be: using the line to cast and then keep it off water. I was rewarded by catching an amazingly beautiful trout. 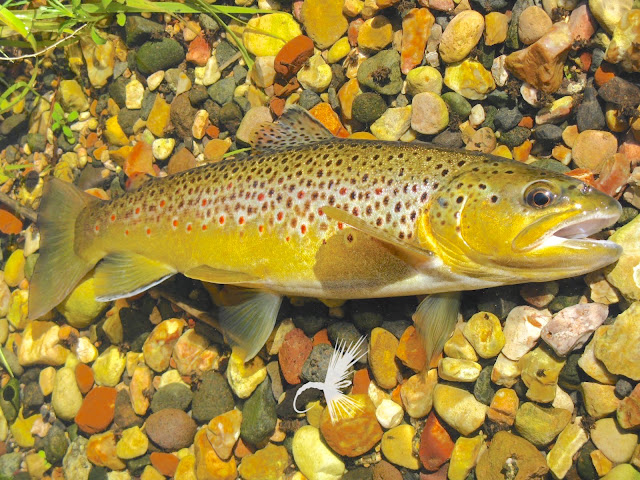 After releasing this beauty I waded a little bit upstream but it was not the good time, the sun in my back cast my shadow on the stream. On this stretch of the stream it is only possible to fish from one bank so I decided to collapse my rod. Better leave the trout alone. I walked down the stream slowly while taking a few pictures and thinking about the trout I had caught. It has been a short tenkara fishing session but very intense. 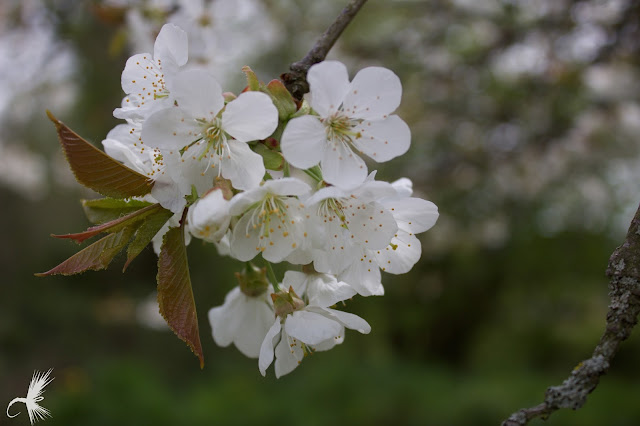 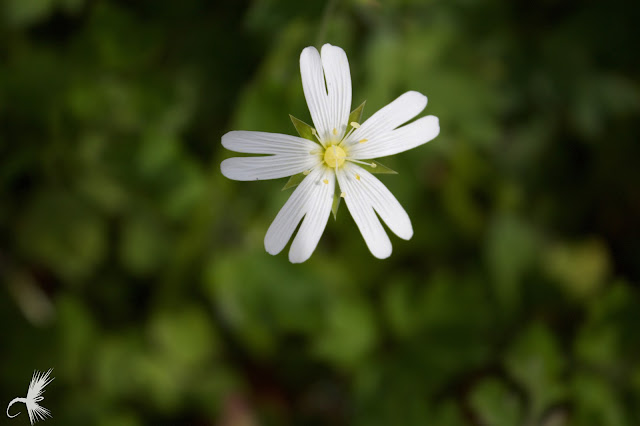 Pleasure is the only measure a trout fisherman should ever take.

The Fujino firm, a company that has produced fishing lines in Atsugi, Japan since 1957 has called several times recognized tenkara experts to design lines such as Takashi Yoshida  for the "Soft Tenkara" and "Tenkara Midi" lines and Masami Sakakibara for the "Soft Tenkara Long Type".
A few weeks ago Fujino announced the imminent release of a new tenkara line designed by a very experience angler who has greatly contributed to the evolution of this fishing technique and is a widely recognized ambassador: Dr. Hisao Ishigaki. 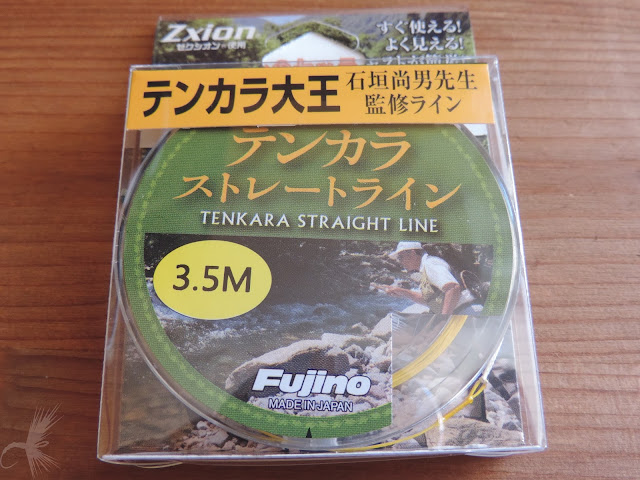 This line, commonly called "level line" is not made of fluorocarbon but of polyarylate, a family of thermoplastics polymers with various industrial use. In the case of this tenkara line it is made of a material called "Zxion" (pronounce "Zekushion" ®) which means that it is consisting in polyester liquid crystals whose main characteristics make it an interesting product to make a tenkara line with: high strength, insensitivity to U.V radiation and very low shape memory. 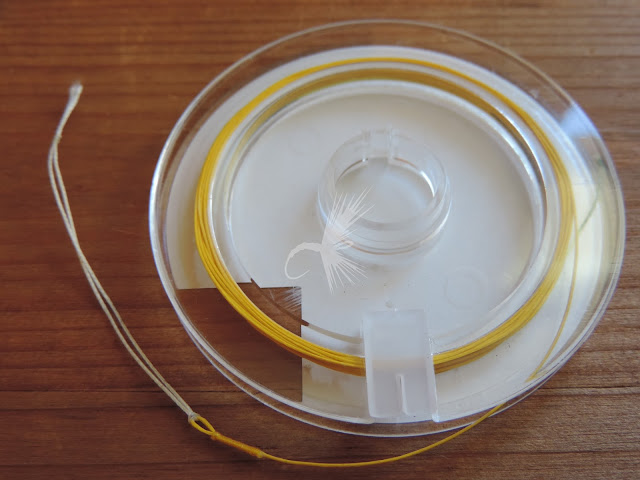 As the picture above shows the "Straight Line" has a yellow stain that I call "curry yellow", it is an opaque non-fluorescent yellow which is a good idea as fluorescent yellow for tenkara lines has the disadvantage to make it virtually invisible, except when fishing in low light conditions, and that is a problem especially for beginners.
This line that Dr. Hisao Ishigaki has first designed for tenkara beginners make accurate casting easy as it is stiff enough to be easily controlled and it is dense enough to insure an effective transmission of the casting motions energy. The tip of the line is made of a 30 centimeters section of furled nylon with black markers every five centimeters. This makes a strike indicator which can be very useful for a tenkara beginner.
This line is available in three different length: 3.50, 4 and 5 meters + 30 centimeters furled section. 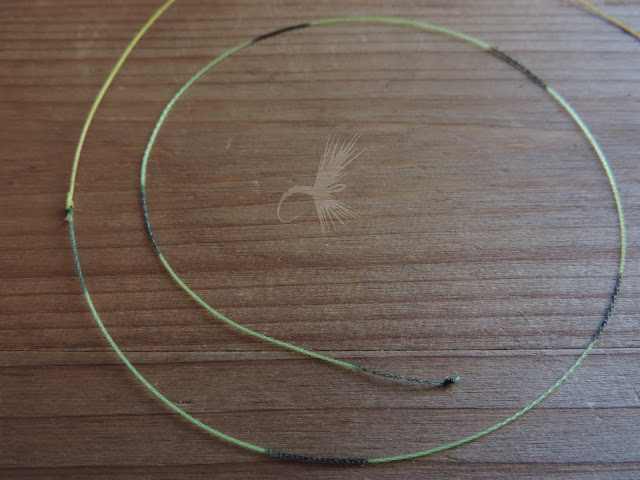 Dr. Hisao Ishigaki is, besides a tenkara angler with a forty years experience who has stayed faithful to the principle of simplicity in tenkara and is unanimously recognized as a tenkara ambassador, a renowned ophtalmologist who has among many other things supervised the development of vision training software for Nintendo and that is in my opinion a guarantee of seriousness in the design of this tenkara line.
The furled nylon tip has elasticity enough to absorb the energy of the hook settings and if it is your "thing" you can use the black markers as a fish measure tape as there is five centimeters between each of them. 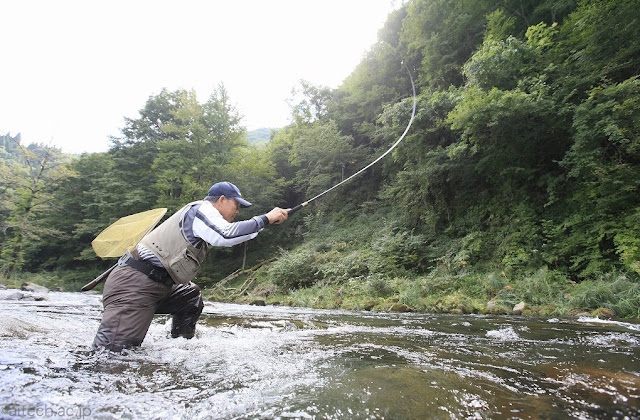 Fishing with the "Straight Line" is really pleasing, it perfectly matches the objectives of its concept and in my opinion it can go further than matching the specific needs of tenkara beginners as this line allows very delicate kebari presentation.
This line is really a part of what is best among tenkara lines as those created by Hiromichi Fuji, Yuzoh Sebata,  Takashi Yoshida or Masami Sakibara which are all the fruits of a long tenkara experience, a high level of demand and fidelity to the principle of simplicity.