JOHN RS ALLEN "ONE MAN AND HIS ROD" BOOK REVIEW

Three weeks ago I posted a review about John's latest book and today this review is about one he published last year and for several months was only available on Kindle format.
Titled "One man and his rod. Tenkara fishing in Dorset" this 103 pages books is presented as a logbook covering 2012.

Let's start by the beginning! The cover of this book is a drawing by the author and if I had understood the Japanese style appearance for the other book which is a general book about Tenkara I really do not understand that this kind of cover is also used for a book dealing with Tenkara in Dorset!

All tastes are in nature...Perhaps is it only a detail but I would have prefered a picture, a painting or something that illustrates the area where John fishes. 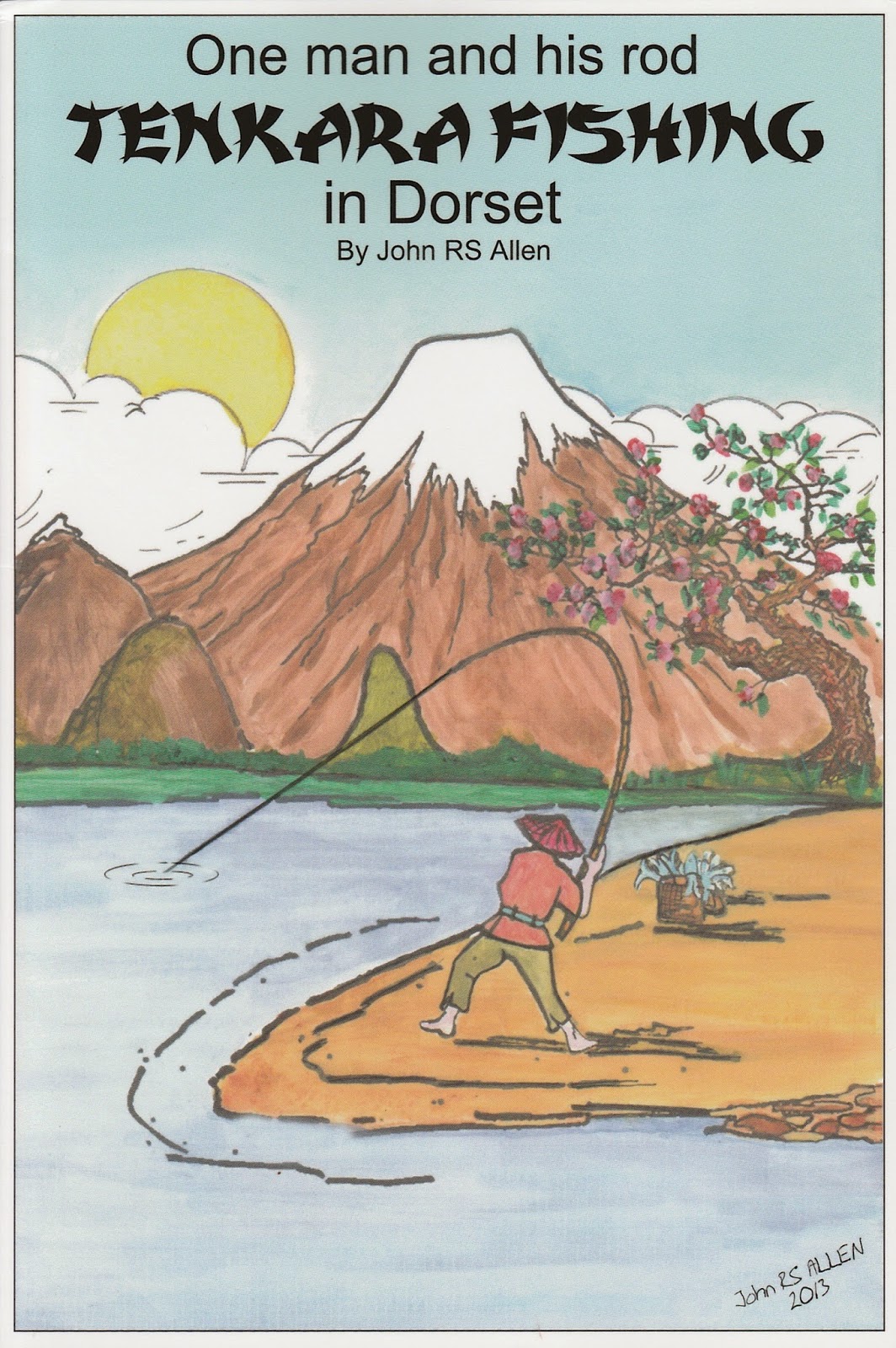 This book is divided in three parts, the first one has 23 pages, the second 45 and the third 29. The first part is a kind of historical and theoretical presentation, the second is a John's Tenkara logbook and the third and last part deals with various topics.
In the first of his book John RS Allen tries to make the most complete presentation of Tenkara's history and theory in only 23 pages; the exercice was perilous but the result is not bad at all and even if a lot of the subtleties interesting for passionates are not in the book most of newbies will find simple answers to most of their questions in this part.

Although I do not intend to argue point by point what John has written in his book which is based on his knowledge and experience I did not understand why  he also exposes ideas and technics that he does not agree with and does not use himself. This makes this book pretty impersonal. The exact contrary of a title such as "One man and his rod".
One good thing in this first part is the fact there is not an overabundance of illustrations, every of them but one are useful! 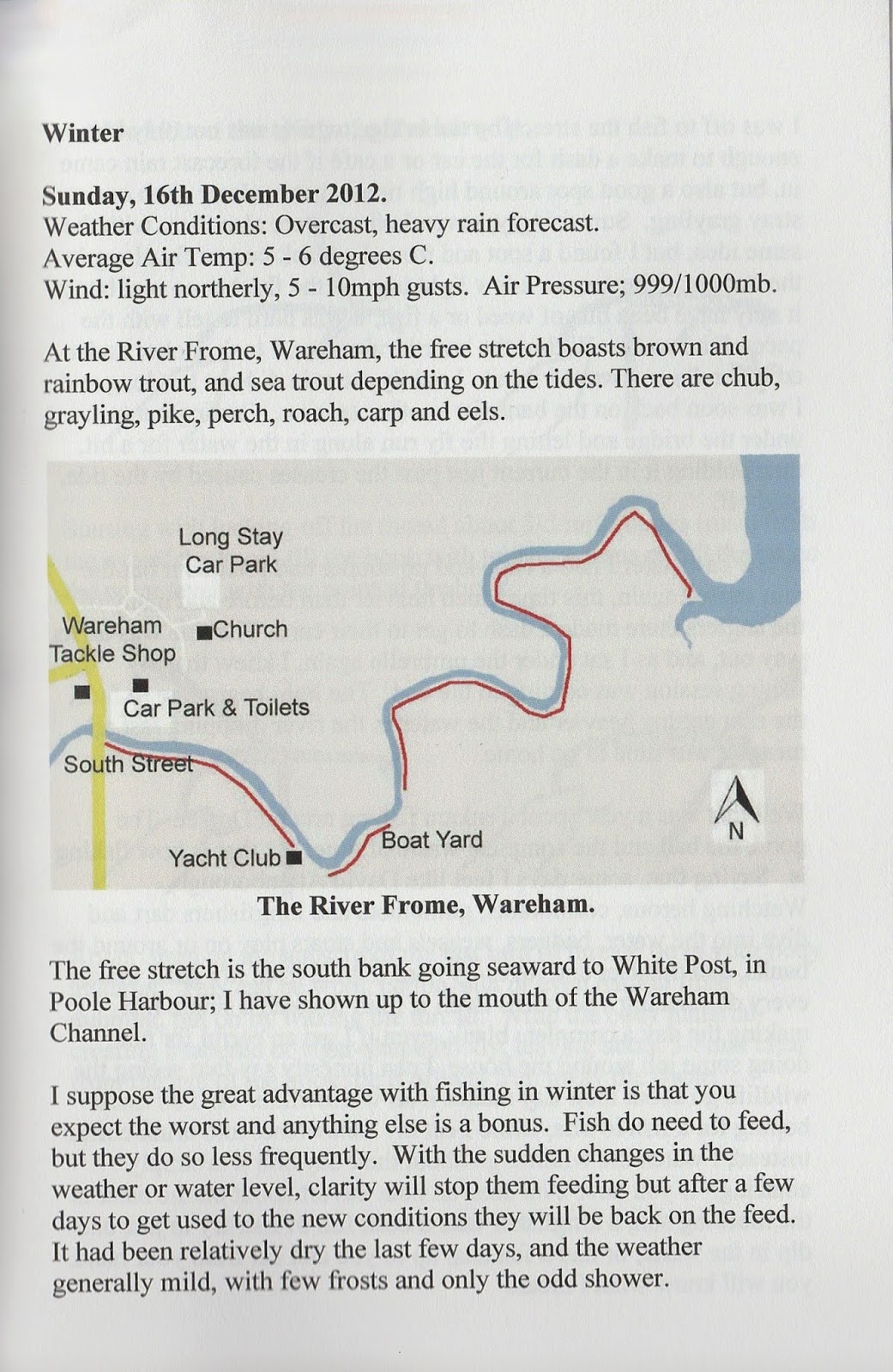 As I did write in the introduction the second part of the book is a logbook covering 2012, from January 1st to December 16th.
After I finished reading this part I had a strange sensation. For each outing John gives conditions, moon phase, atmospheric temperature and pressure, water temperature, wind direction and force and a small card to locate the spot.

If John describes precisely conditions and the places where he fishes I regret that his logbook is only illustrated with cards because the text is interesting but really spoiled with an impersonal layout. Give this logbook without anything else to anyone and I am sure that almost no one will read until page 10.
It is a shame that this part of the book has absolutely nothing personal such a drawing or a picture by the author because the logbook should be the heart of this work. It is not unpleasant to read because John fishes in rivers, ponds and sea shores; there is a lot of interesting things for the anglers who want to try to adapt the Tenkara style of fishing in various biotopes or to target different species.

For my taste, this second part of the book really lacks poetry and philosophy and I sincerely think that some richer illustrations would have given more life to this logbook.

The third and last part of the book is a king of tote encompassing fly tying, line spools, tackle shops and many other topics. That is not really a problem for me but as a reader I would have sincerely preferred only one or two topics but to see them covered better. It is not a problem to me to include a Tenkara glossary in your book but it is a problem to me when you do one with only one or two Japanese terms and not even a single mention of a Japanese Tenkara master. Give Caesar what is Caesar's.

To conclude, I have been disappointed by this book, not that John RS Allen has nothing interesting to write, because it is too impersonal.
If you want to read to read this book and make your won opinion you can purchase it here.