After the first edition of Tenkara Fest we were determined, Eric Robert and myself, to organize this event annually and this year we did chose Lozère for the meeting. Like many tenkara anglers we are members of various social networks and forums, but we share the opinion that nothing will ever be better than meeting other enthusiasts, or novices, in real life and share some good times together. 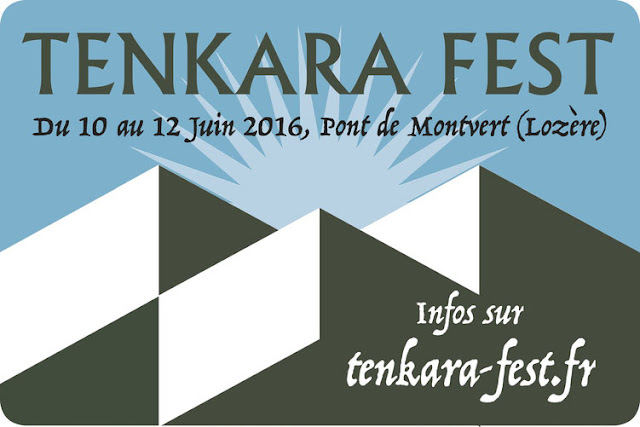 After an about five hundreds and thirty miles drive I arrived in Lozère on the banks of the Alignon stream where I was to meet a young man who had contacted me through this blog and asked me to introduce him to tenkara as he wanted to discover it because as he did tell me it was exactly the image he had of fly fishing. 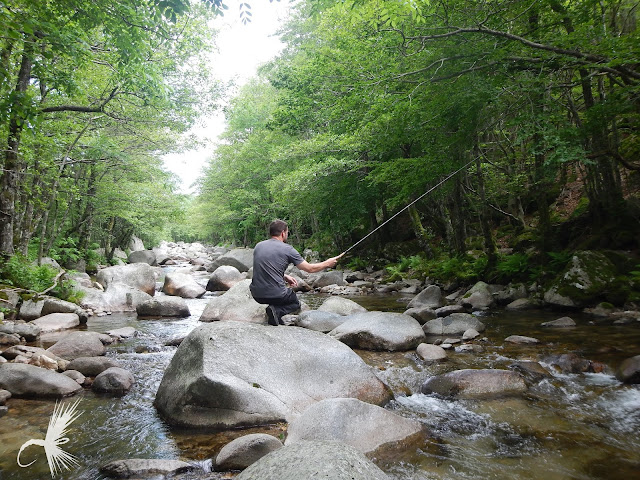 It was a pleasure for me to advise that angler who quickly showed good casting skills and also quickly got his first trout with tenkara. 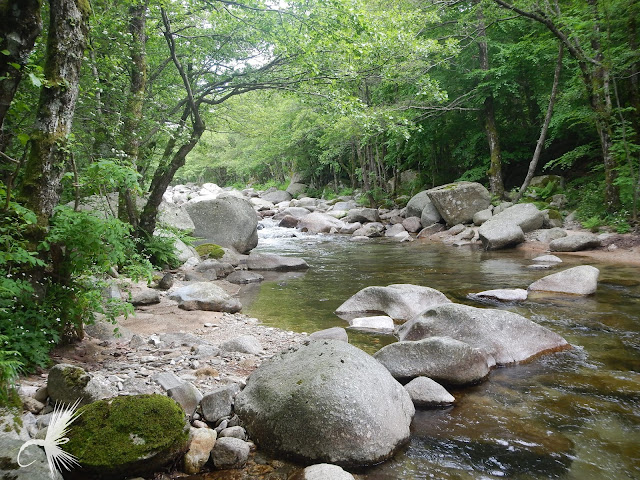 Then I did join my friends in a cottage located in a place where we had a really spectacular view. My comrades were returning from a great session of successful fishing on a stream stretch located in the nearby village and so we were all in excellent mood and glad to meet each other after a year. 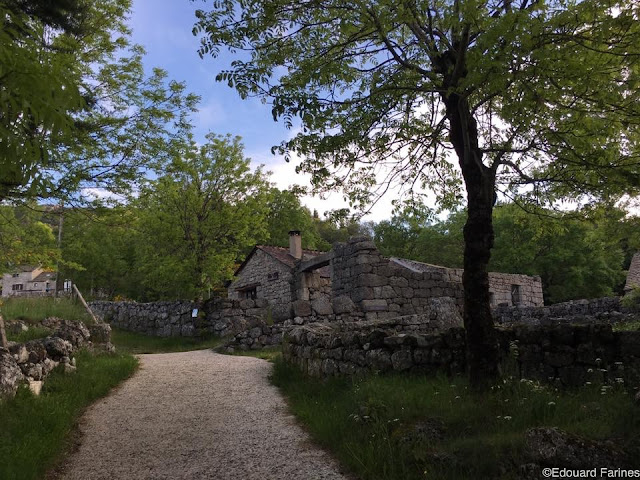 We spend a great evening in a spirit of sharing and exchange. After this first day we were tired and not long resisted the urge to jump into the arms of Morpheus. Personally after nine hours of driving and two hours of fishing I was literally washed away. The next morning we did wake up at dawn with the singing of a cuckoo, took a quick breakfast before heading down to the banks of the Tarn. 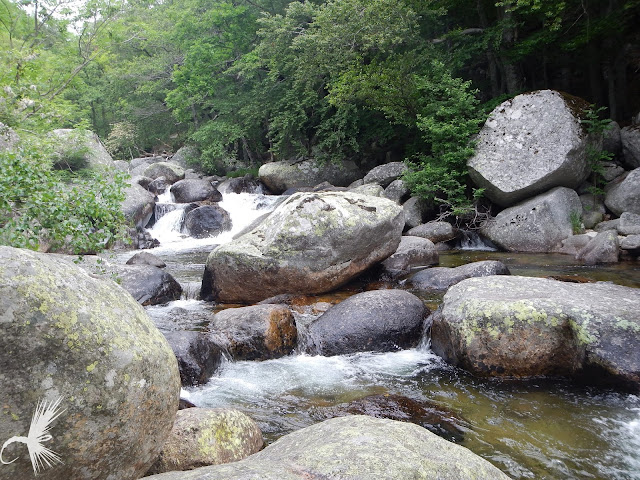 On this stretch the banks are very steep, the stream is narrow and it was for me a great time to discover it in tandem with my friend Edouard while Guilhem, Eric and Jean-Marc did fish an area downstream. The area we did explore is populated by wild and very discreet brown trout and it was a pleasure to make them bite some of our lures, seeing these trout rush to what they believe to be an insect landing on the water is a lot of fun. When two hours later we walked back towards our starting point we realized that we had not gone about three hundred meters upstream despite our climbing sessions. It was also an opportunity to observe under the bridge from where we observed a beautiful big trout in the tail of a current waiting for food from the upstream. 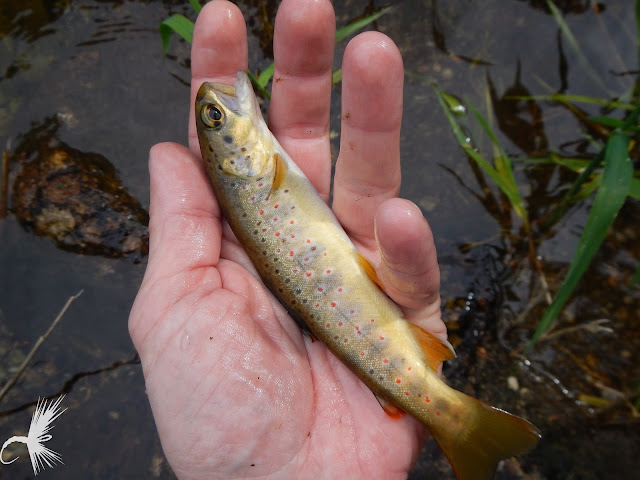 Back to our starting point we did find our friends who had also spent some time fishing on a downstream portion and we decided to have lunch before going to the Tarn river gorges. 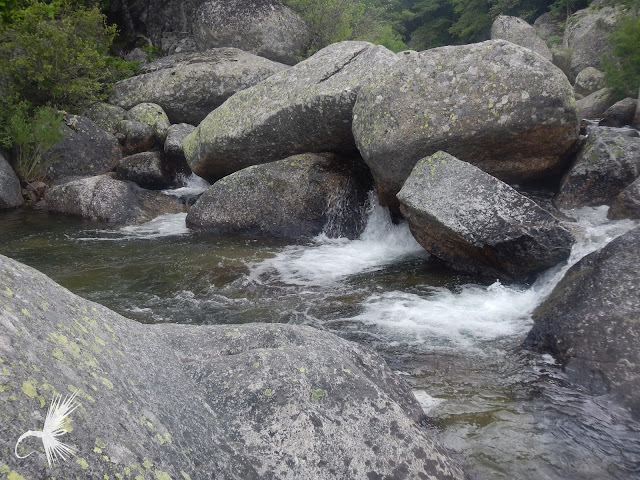 The fishing in the early afternoon was difficult because of the wind rushing into the gorge, it was difficult to keep control of our lines, which is essential to success in tenkara but we had the chance to practice in beautiful surroundings and had no doubt about our ability to counter the difficulties. Edward was the first of us to deceive a trout. 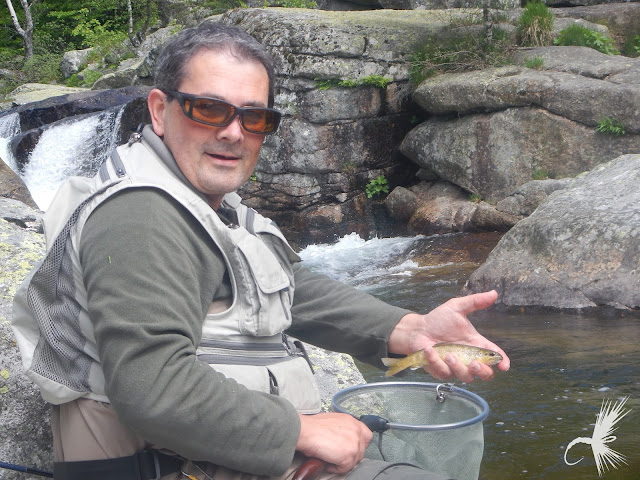 The wind went down about four o'clock offering us two hours during which we will take a lot of trout. 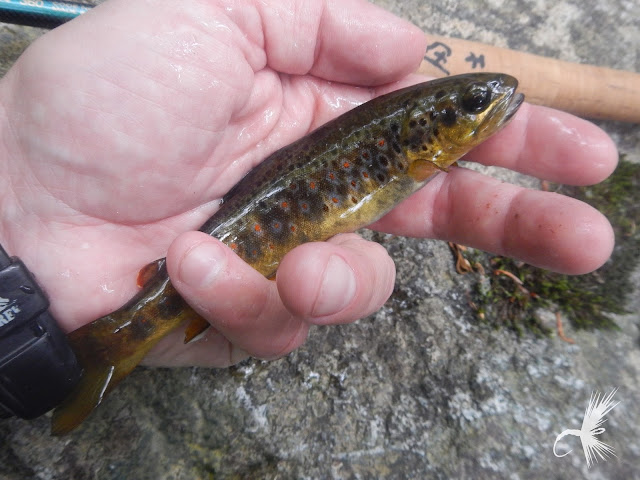 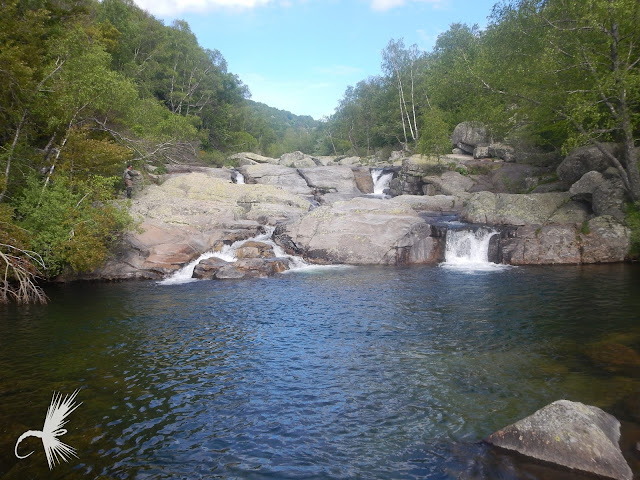 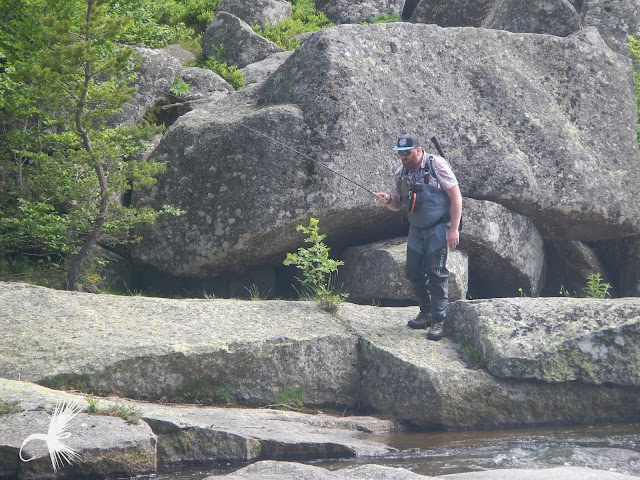 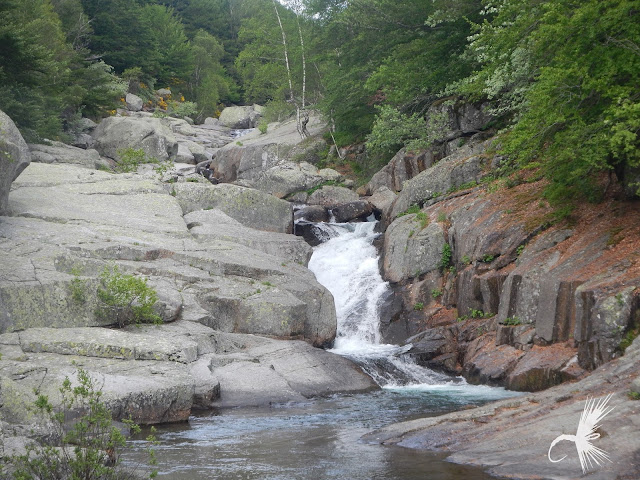 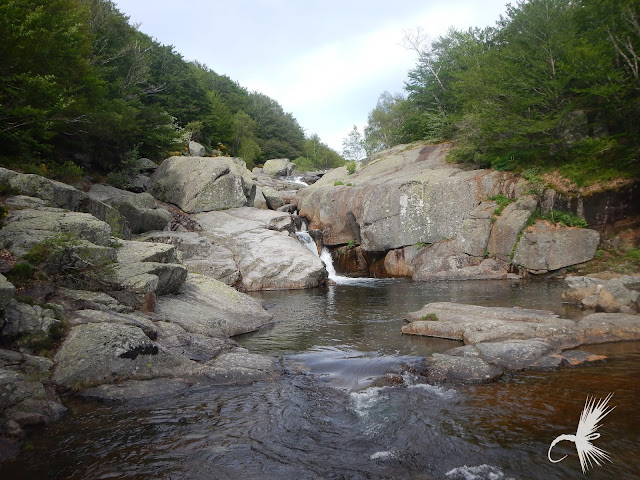 We did fish successfully as we did take altitude. The latest waterfalls offered us a great show and then we arrived on the plateau where the Tarn flows between meadows and forests. 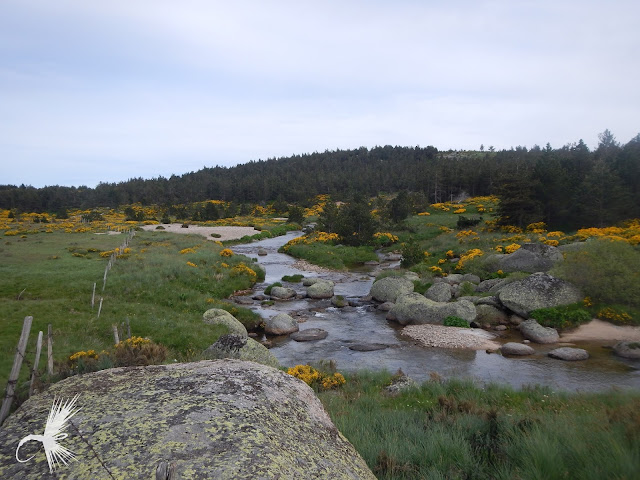 Arrived on the plateau we did fish a little bit and it was with surprise that I realized how much the trout differed from those caught in the gorges. 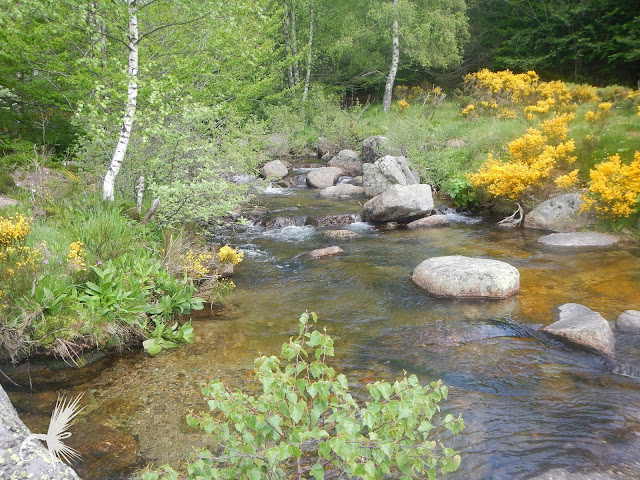 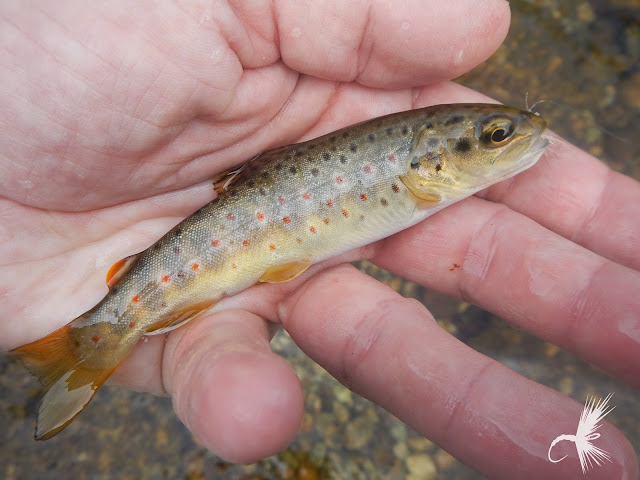 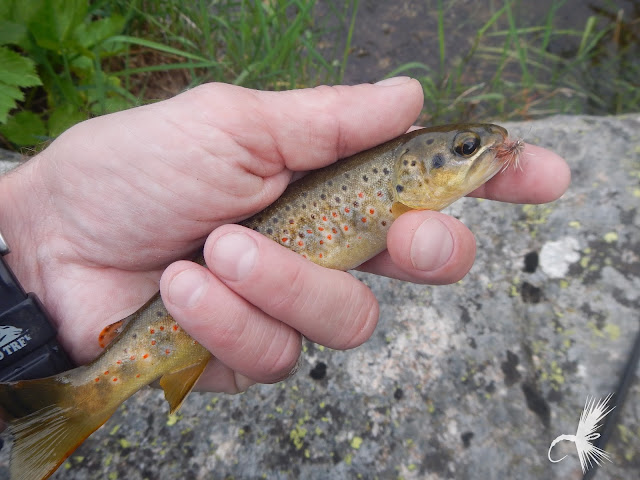 Delighted by this afternoon of fishing we decide to collapse  the rods and we were joined by Eric and Jean-Marc, who had fished earlier upstream on the plateau. 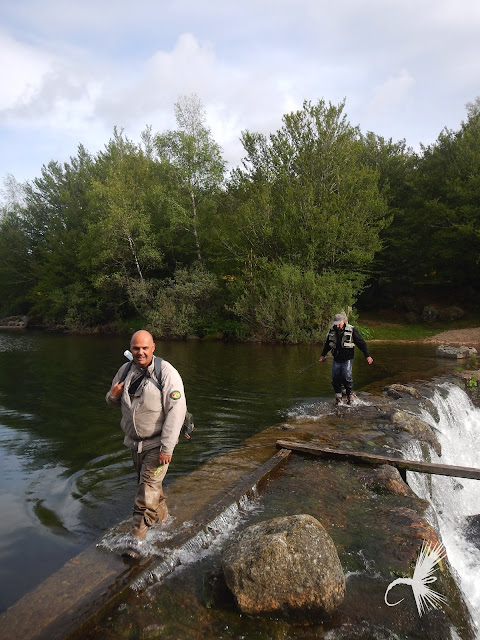 After this great day of fishing we returned to the cottage where we did spend a memorable evening.
The next day we went fishing a few miles away, on the Lot river, but the morning was very cold and very windy, making fishing very difficult although we had the opportunity to observe many trout on the spot where we were. 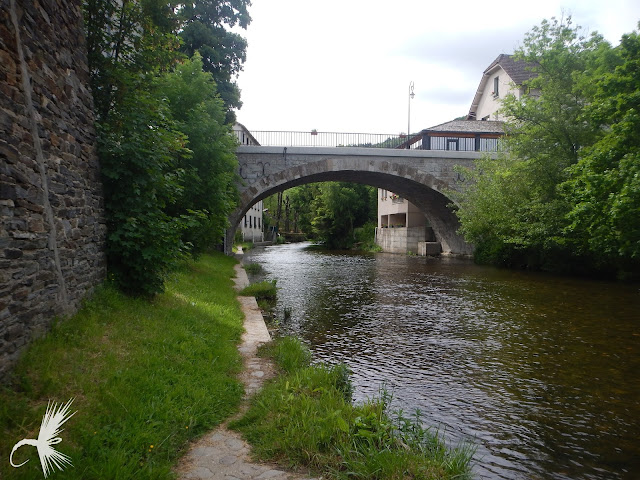 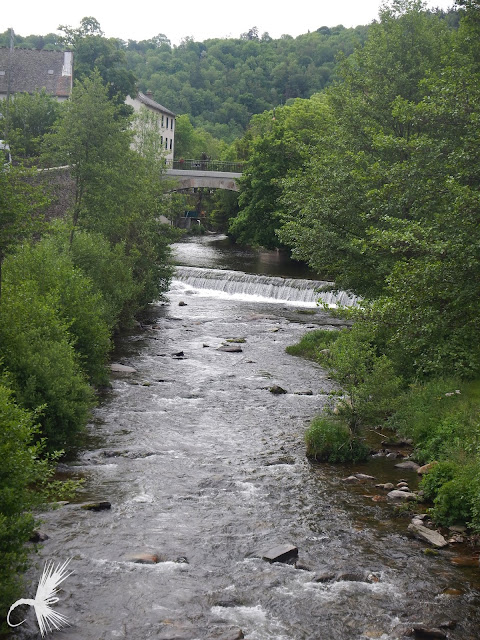 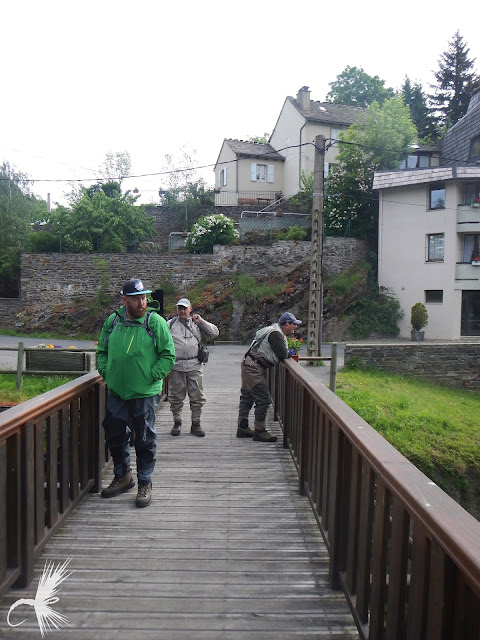 The sky cleared in the late morning and it is in the shade of a plane tree that we had lunch before being joined by several people with whom we did go fishing a few miles downstream on a beautiful catch and release area. We did make a tenkara fishing session there punctuated with nice catches. I will come back in a few weeks to tell more about this tenkara fishing session. 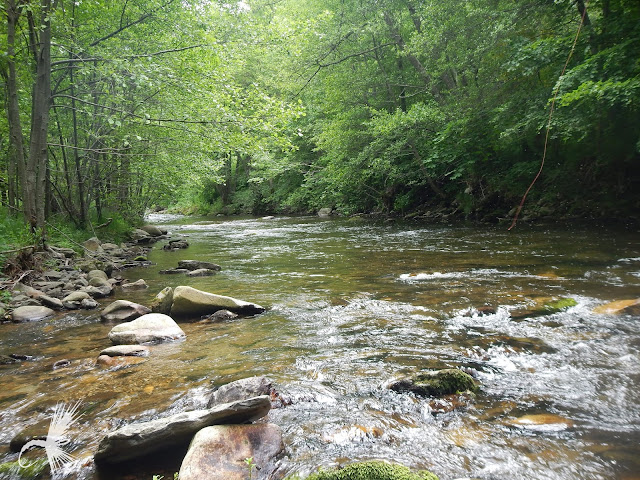 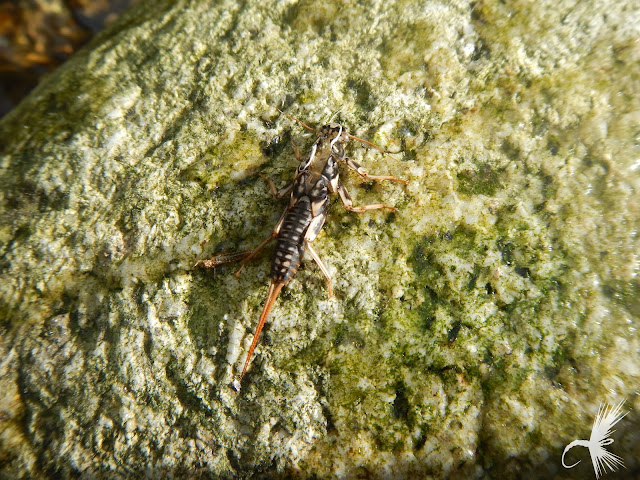 After three days spent together we separate, all happy to have shared our passion for tenkara we said: "See you next year!"