Several months ago Eric Robert and I decided after a phone call to organize a tenkara meeting in Ardèche because we thought that if we were doing a good job to promote tenkara with our respective blogs and the french tenkara forum that we have founded but that it would be really cool to meet other tenkara anglers. The french tenkara forum is cool, there is no "expert" and novice, absolutely no elitism from anyone and every one can express his experience and perspective about tenkara. We rapidly chose Ardèche because of the beauty of this area and it happened that the owner of a very famous fishing spot on a mountain plateau agreed to welcome the event on his property. 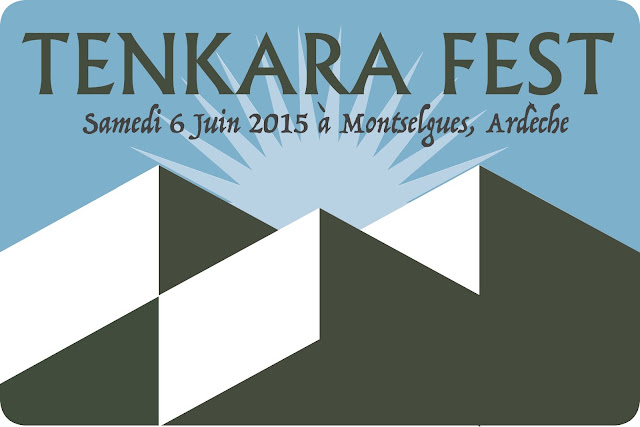 The saturday morning I did arrive on the fest site at 8 o'clock after a one hour drive and I was not really surprised to be the first there because during my stay in Ardèche I had rented a house at about 20 miles from Montselgues and other people attending the Tenkara Fest, except Edouard, had to drive from further areas. As the participants arrived we had an interesting conversation about tenkara not only as a fishing technique but also a philosophy because most of us are ex-fly fishermen who are looking for a new perspective about fishing. We are not looking for gurus or experts but we just want to share our experiences. Like the day before the air temperature was high so we decided to start fishing before it was too hot. Eric caught the first fish of the day, a nice brook trout, on a small black wet fly. 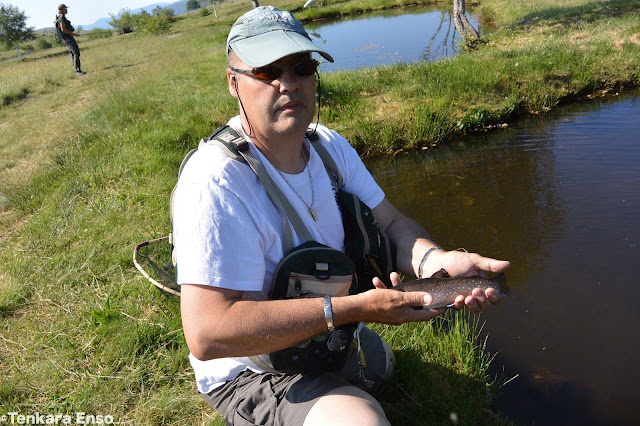 Christian, a tenkara novice with a long fly fishing career, rapidly got his first trout on his Royal Airstage rod that a few minutes before had never got out of its original carton. This was the perfect exemple of what tenkara can bring to experienced fly fishermen: a new perspective in simplicity and efficiency. 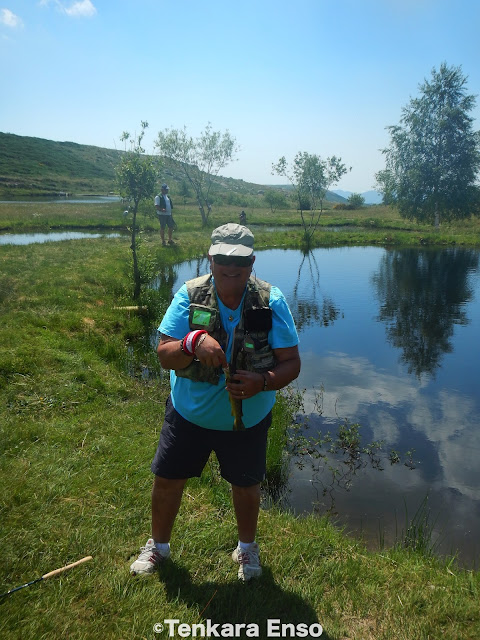 I started fishing with a black wet fly but as the temperature rose fishes became focused on the water surface waiting for insects to fall on the water so I did skip to a black dry fly. Raindows, brownies and brookies were very active and showed great interest for my black bug. 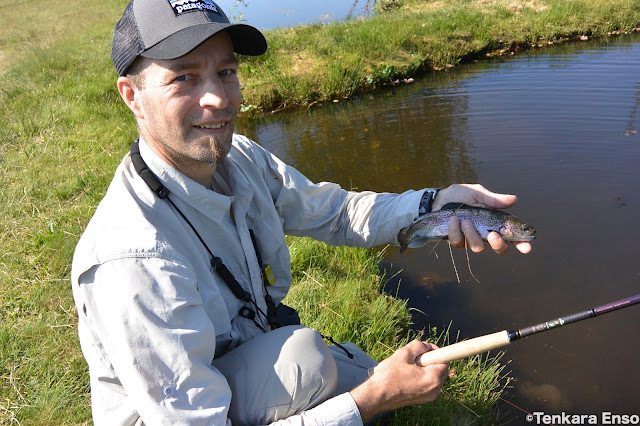 The Tenkara Fest has also been the opportunity to meet Jérôme Rolland, the sympathetic and talented designer who created my blog logo, and Manu Galiana. This young fly fisher has shown very good technical skills all day long. He is very interested by tenkara and as he has no prejudice about anything different from western fly fishing he can rapidly learn the basics of tenkara. One example of that is "hand-lining": I only had to show him once without saying anything for him to understand what it was and the interest of this netting technique. 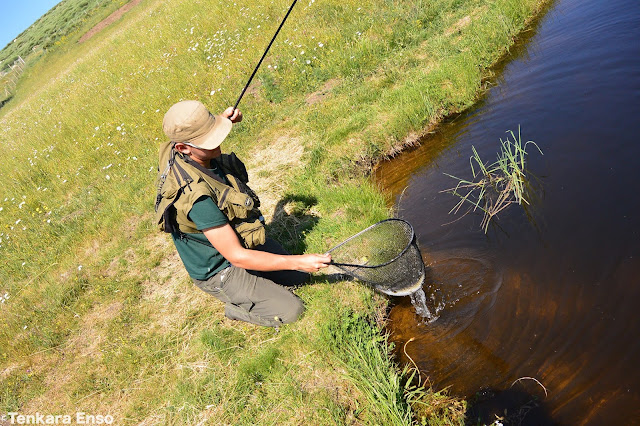 I had not fished on dry flies since several years and I must admit that it was cool to fish this way in these gin clear ponds that gives the possibility to watch fishes coming under your fly to bite it. 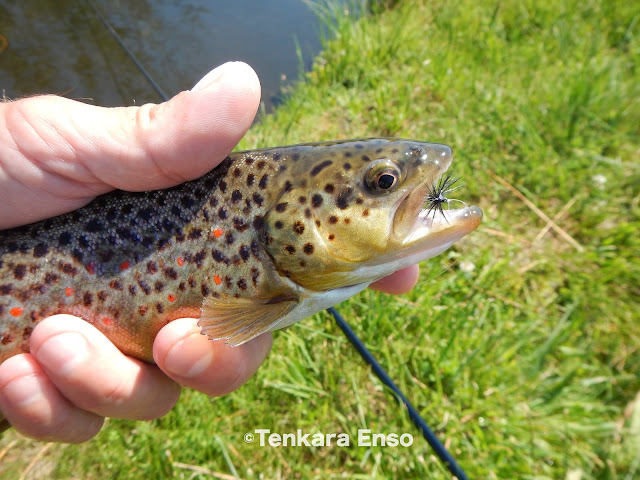 The morning passed quickly, one does not see time passing by when catching a lot of fishes! Around half past noon I did feel that the temperature was really on the rise and as my comrades hunger and thirst led me to go the shaded veranda where we went for lunch. 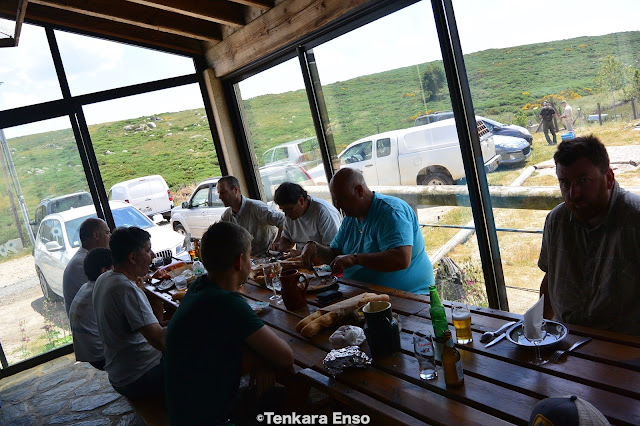 We had a very interesting conversation about tenkara and the atmosphere of this lunch was very good and truly reflected that we all got along very well. Some of us are more experienced with tenkara but everyone could express his point of view, ask questions and share his feelings about tenkara. If one day you have the opportunity to visit this place you have to taste Mrs. Ayglon traditional dishes which are delicious. 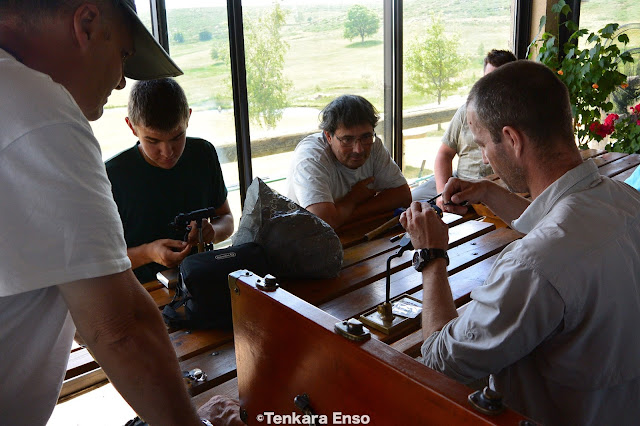 After the lunch Manu and I did a fly tying demo. I needed to tie more dry flies as the only one I had used the morning was in very bad condition after the big number of fishes that had bitten it. As usual I focused on general aspect instead of super small details and the afternoon fishing session will show that I was right because I caught even more fishes than in the morning. 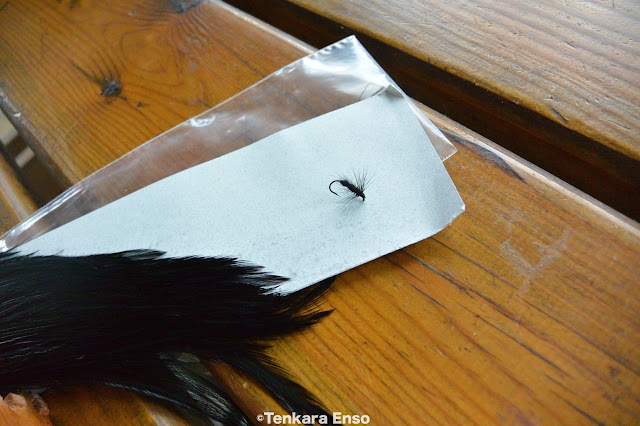 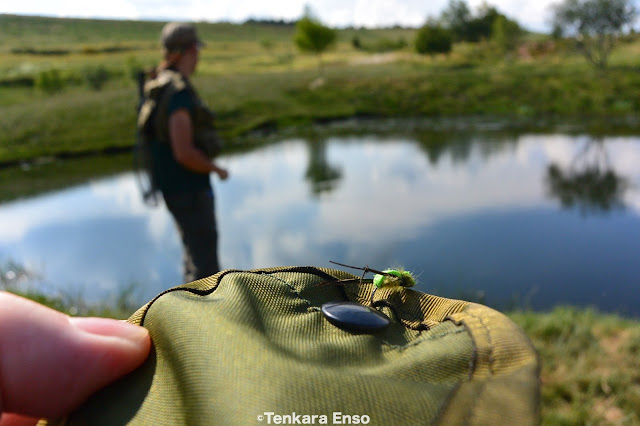 We started fishing back around three in the afternoon, it was very hot but hopefully the wind was blowing an d it made the heat a bit easier to stand. Without the wind I think that fishes would have stayed in the depths where the water is colder than under the surface. 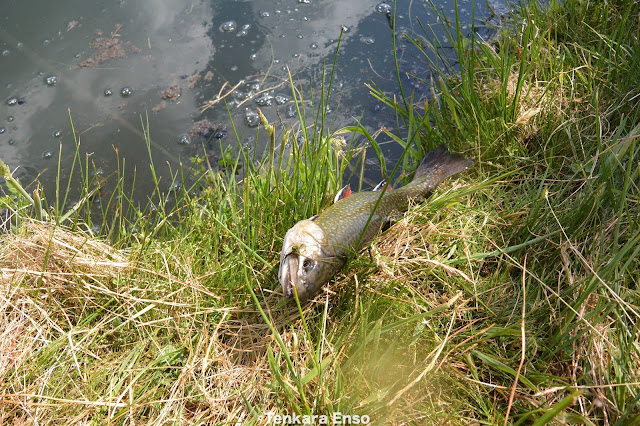 Each of us caught a lot of fishes during the afternoon and I must say that I was a little bit surprised by the strength of most of them, especially brookies. 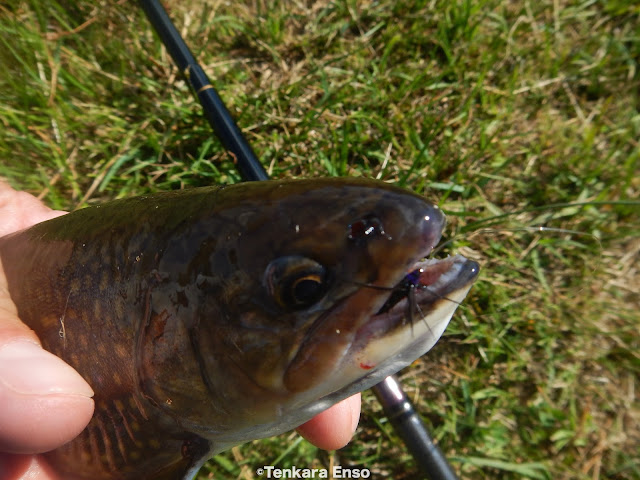 At about half past six we stopped fishing as some of us has several hours drive to get back home. We had good times drinking an ice cold beer before saying goodbye to each other and we all agreed about one fact: there is going to be other editions of the Tenkara Fest. 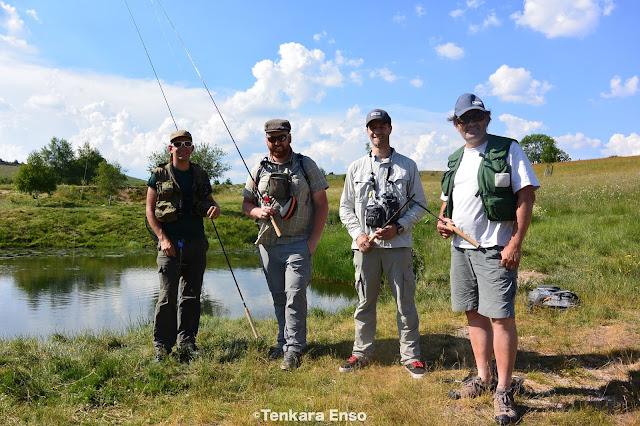 I did leave this beautiful place with the feeling of having spent a very good day with other tenkara fans and that was the best reward Eric and I could get for our organization and webmastering job that we did a few months ago. There are going to be other editions of the Tenkara Fest and I hope that we will succeed in keeping the very good atmosphere we had this saturday because that is what the people want: having fun fishing with cool people. No one in the tenkara scene needs boring fake experts or dead serious assholes. Organizing this event was a great experience for me and I am sure that I want to do even more for tenkara in my country.
Publié par tenkara normandie à 07:43